FIFA 22: Numbersup - A new event is approaching for FUT

EA Sports, through the game menus, has launched an image of a new event for popular way. FIFA 22 Ultimate Team Arriving Friday, November 12. 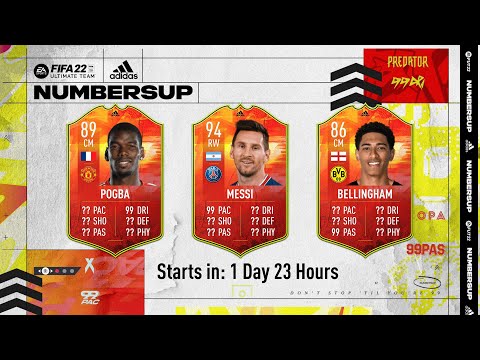 The Canadian software house has not revealed the official details of the promotion in question, but by the graphics it is easy to guess that this is the event in collaboration with Adidas announced a few weeks ago.

At the moment we only know that the new event will be appointed NumberS up, on the other hand, if you would like more information about the announced promotion on October 21, we refer to the dedicated article.

Stay tuned to our pages, we will continue the story, and we will not stop updating them about it. Waiting to receive more information at the foot of the news, we attach the image disclosed by Electronic Arts.

FIFA 22 is expected for October 1 to PlayStation 5, Xbox X-Series, PlayStation 4, Xbox One, PC, Steam and Nintendo Switch. Continue following us also through our social networks Facebook and Twitter for other news and information.